You are here: Home >> Announcements (HOME PAGE CENTER) >> Minutes from May PTA Meeting

The new executive was elected unopposed as a slate. Officers assume roles as of the conclusion of the meeting, except the Treasurer, who assumes responsibilities at the end of the fiscal year (June 30). June is intended as a transitional month.

See the Revenue image: Lines in orange funds at the top are funds we had to start the year; the white lines are what we need to raise to get the total to spend. The third column is projections for next year (2022-23). We are projecting to end the year with $21,000 in the bank. Our revenues have fallen short of the budget, but we restrained spending, so we have $21K from this year + $98K from M@M, about $119K in hand to begin the 2022-23 school year.

Our major expenditure is classroom aides; the PTA funds five in grades 1-5 to support DCPS staff. We are proposing again a significant investment in classroom aides; $114,060 is allocated to their pay, a growth of $18,360. That allows a slight increase in hours as well as a raise to account for inflation.

AL notes that a budget is an expression of an organization’s values; so clearly, we value the aides.

The sections headed in blue are expenditures controlled by the school; the PTA gives this funding to Maury administration to disburse at their discretion. The other $10,000 budgeted  here is additional resources for the school —programs like roots of empathy or whatever the  school wants. AL notes that the PTA has trimmed some line items in consultation with school management, such as some professional programs, principal funds, and garden supplies and testing support; we’ve also consolidated the school supply line.

Sections headed in green indicate funds budgeted for the PTA spend directly: $16,900. Much of this is also unchanged from previous years. Big differences: we’re bumping up funding for PTA events and activities to have all kinds of activities that aren’t fundraisers so that people can gather around school.

The other big spend is a $5,000 line for a bookkeeper so that the treasurer’s load is reduced. AL notes, from experience, that handling payroll for five employees in addition to annual taxes, issuance of charitable receipts and reimbursements is a lot for a volunteer. Funding would allow a book keeper to work about 2 hours a week.

Questions about the budget or proposals for change are welcome via email: maury.pta.treasurer@gmail.com. This budget will be approved by the full body of the PTA at the June 16 meeting.

George Blackman asks about Dining Out for Maury. AL says that we’d love to do that but we don’t want to build revenue assumptions around the revenue industry right now, but if we can do it, we will.

Rome in the chat asks about Amazon Gifts (Smile) and AL says it is included in ‘small fundraisers’ line. AL reported, in the chat, that Amazon Smile brings in about $450 annually.

Outgoing President Ross Kyle (RK) Notes that Maury at the Market raised $98,000 for the school. That money goes directly to fund five teacher’s aides in the school. RK says that is a clear and direct benefit but notes that another one, nearly as important, was the fact that the community was again able to get together as a whole.

Reminder: There is a whole school morning meeting at 8:45 a.m. with a coffee time starting at  8:15 a.m. on the Constitution Avenue side.

Principal Payne Chauvenet (PC) offers congratulations to the new executive, noting they will now see behind the scenes and get to know more people especially the staff

PC says field day will be June 21 for pk-grade 1 and June 22 for grade 2-5, split for reasons of space. Usually parent volunteers are needed; reach out to gym teachers Ms. Fall and Mr Muha if you are interested.

PC says PARCC testing is now complete except make-up tests. She encourages parents to visit the lost and found, calling it “overwhelming”. Usually, Maury will periodically donate abandoned items; this hasn’t happened as much this year, given that parents are less frequently in the building; but all items left at the end of the academic year will be donated, so check it out.

All returning families are invited to the June 1 sneak peak to meet teachers at next grade level. June 1. Each grade level has a different time. These are sent out in Principal’s Tuesday updates, and teachers will send info out as well. Families should go to the time for the grade your child will be in next year (so if your child is now in Kindergarten, go to the grade 1 time! 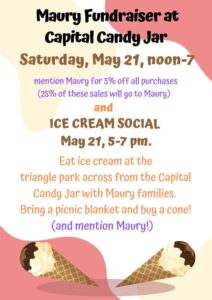 Saturday Ice Cream Social at Capital Candy Jar (201 15 St NE): Stop in to buy a cone and bring a blanket to join in a Maury ICE CREAM SOCIAL Saturday, May 21 from 5 to 7 pm. In the triangle park across the street. Get the Maury Discount! From noon-7 mention Maury for 5% off all purchases (25% of these sales will go to Maury)!

There will be a bake sale at the school during dismissal hours June 8.

Learn About the PTA Teaching Aides

Please enjoy the video at the top! It was made for last year’s Maury at the Market. It tells you more about how the fundraising dollars you raise and contribute are spent.